“There are no shortcuts in evolution.“- Louis Brandeis

According to Microsoft, this is how the .net ecosystem looks today:

The landscape is still pretty fragmented. We basically see three completely separate stacks used for the development of different kinds of apps. We have the Windows-based full.net framework with .NET CLR and .net BCL that is used to develop desktop (WPF, Win Forms) or server-side (WCF, ASP.NET, ASP.NET WebAPI , ASP.NET MVC 1-5) applications. We have the modular, open sourced and cross-platform .net core stack with corefx and coreclr that is used to develop desktop (Console), UWP or server-side applications (ASP.NET Core). Finally, we have the XAMARIN stack used for mobile applications development based on Mono Class Library.

And this is the future .net ecosystem:

.NET Standard is a core cross-platform framework that will be reused by all .net stacks. The motivation is to unify the existing stacks and prevent future fragmentation and that’s very cool! You can think of .net standard like the finer grained and cross-platform equivalent of mscorlib, the huge assembly that’s part of the current full .net framework and that’s considered the core of .net BCL. For example, if the System.IO, System.Threading, System.Collection namespaces are defined in mscorlib.dll in the full .net framework, there are separate assemblies for these in .net standard.

Technically speaking, .net standard is a NuGet package that doesn’t contain an actual assembly but has a lot of dependencies on multiple fine grained NuGet packages that contain those fine grained assemblies. (System.Runtime, System.IO, System.Threading etc.)

Some articles from Microsoft suggest that .net standard has been introduced together with .net core 1.0 with June 2016 RTM and earlier previews. Given this and the strategy diagram above that they suggested as the future, it’s easy to think that currently .net standard is the core of the .net core and that .net framework will also implement it in the future. You can imagine a future major version of .net framework (5 or 6) that will implement .net standard by refactoring the current mscorlib into the finer grained assemblies.

But…surprise! The .net standard compatibility matrix suggests that .net standard is already compatible with full .net framework versions even since .net 4.5! In other words, my app assemblies targeting .net standard 1.6.1 for example would be able to run on Windows instance having just .net framework 4.6.1 installed without .net core. But .net 4.6.1 has been released way back in November 2015. How is this possible?

Let’s dive into the details and see what’s happening on development and runtime environments when you mix .net standard, .net core and .net framework. I’ve created a sample solution for this mix using Visual Studio 2017 RC.

Pretty fair if you ask me. Besides, the second point is of key importance for implementing the Cone Architecture pattern as we’ll see shortly.

My ClassLibraryNetStandard project is a class library targeting .net standard 1.6.1. This makes it cross-platform! It includes a single trivial class Test:

The ConsoleAppNetCore project is a console app targeting .net core 1.1.0. This is realized through a dependency on Microsoft.NetCore.App v1.1.0 NuGet package which further depends on NETStandard.Library 1.6.1 package. This project also includes a project reference to ClassLibraryNetStandard project and a NuGet package reference to Newtonsoft.Json v9.0.1.

In VS 2017, the .net core and .net standard projects dependencies are nicely grouped visually under a Dependencies node with separate sub-categories for different type of references: NuGet, Projects and Assemblies. The NuGet dependencies are also nicely displayed as trees including the actual assembly and their own NuGet packages dependencies:

As you expect, this setup is cross-platform. If I do either a framework-dependent deployment or self-contained deployment of ConsoleAppNetCore like explained here, I could run it on Windows, Linux and OS X.

The main method instantiates a Test object, serializes it and outputs the JSON to console:

Looking at the references section in the assembly manifest of ClassLibraryNetStandard assembly:

It depends on System.Runtime, System.Resources.ResourceManager and System.Diagnostics.Debug assemblies. But those assemblies are part of .net standard and are installed by a .net core runtime installation (C:\Program Files\dotnet\shared\Microsoft.NETCore.App\1.1.0 on Windows).

How can then my app run on Windows with just .net framework 4.6.1 installed without .net core runtime and without me deploying those assemblies?

Taking a look in GAC (C:\Windows\Microsoft.NET\assembly\GAC_MSIL) I can find the System.Runtime, System.Resources.ResourceManager and System.Diagnostics.Debug assemblies! But those are just adapter assemblies that don’t contain any IL but just an assembly manifest including a reference to the full .net framework mscorlib and forwarding the CLR lookups for some types to this assembly.

Here is how the manifest of System.Runtime in GAC looks like:

Another interesting thing is that the real cross-platform .net standard assemblies also have a reference to mscorlib 4.0.0.0 but if you look closely that’s not the same as the mscorlib in the full .net framework but a different, much lighter (and cross-platform too!), mscorlib assembly in .net standard. Here is the references section in the assembly manifest of System.Runtime that’s part of .net core runtime installation (C:\Program Files\dotnet\shared\Microsoft.NETCore.App\1.1.0 on Windows):

There are two different mscorlib assemblies, with the same name and version but different unique identities!

Back to Cone Architecture

If you’re not familiar with my DIP-based metaphor, please check this out before reading further.

RoboBank is a learning project. It is a collection of samples of various technical patterns, principles, practices and technologies and a context to explore new things as the domain and the use cases become familiar. From a functional perspective it is a simplified banking system. It is meant to handle the needs of a multinational bank in a simplistic way.

The microservices and the Banking Portal app that are part of the RoboBank system are source controlled in separate git repositories in order to enforce the autonomy and heterogeneity that are specific to Microservices architectural style (independently develop, deploy and scale). The individual git repositories are linked to the main repository as git submodules.

The RoboBank Customer Service implementation is based on Cone Architecture pattern. The core of the application (Domain and Application logic) is being cleanly reused in multiple contexts: 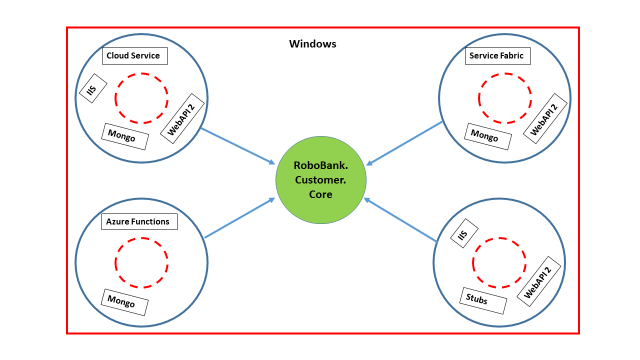 But even if the core is cleanly reusable in multiple contexts it is still constrained to Windows since all the core assemblies are targeting the full .net framework.

RoboBank Account Service is a better implementation of Cone Architecture as it increases the reusability of the core. The core of the application is targeting .net standard 1.6.1 and this makes it cross-platform! The core is being reused in two separate contexts:

I’ve also built two Docker images including the cross-platform version of Account Service for Linux and Windows. You can find these on DockerHub here. You can easily pull them and run containers from them on your favorite platform since the build inside is using a stub (in memory) implementation of the repositories so there’s no DB dependency:

You can also find the Dockerfiles for the images here.

Besides reusing the core in various production scenarios I’m leveraging the new .net ecosystem for testing too:

You can see this example in the RoboBank.AcocuntDomain (.net standard) and  RoboBank.Account.Domain.Tests (.net framework) projects: